[VIDEO] The World Without Romania 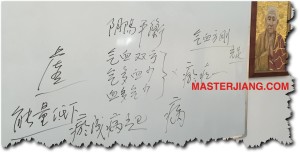 This is one of the Shi Fu’s brief lectures that usually takes place right after a group of people arrives at his clinic. This was back in Sep 2015 and the subject of the lecture was how does Chinese Medicine approach illnesses and diseases, then the conversation switched to what is the root cause of sickness and how can we eliminate it.

What’s written on the whiteboard

Shi Fu is explaining that Chinese medicine and western medicine looks at disease and illness from 2 different perspectives – In Chinese medicine what we call illness, is about yin and yang, the context of the body, blood and qi, and when these things are out of harmony or out of balance  – illness arises.

When yin and yang (in this case, blood and qi) are in balance we can say somebody is healthy, “none of the 100 disease can harm you”.

The four characters you can see here are qi and blood and fangang (方刚) which is typically translated as square, that square is opposed to a triangle and gang is heart, so this means the qi and blood are full.

They are in balance, which means they aren’t deficient.

The qi and blood being full and square is the same thing with saying that they are in balance.

Shi Fu is explains several different patterns for these qi manifestations: the first one happens when qi and blood are both deficient, or in excess in the body, the others being when qi is in excess and blood is deficient and vice versa.

Qi and blood are connected to each other and you can’t treat one without influencing the other.

So, for example, when blood is deficient, there’s a weakness to the breath, to the blood, the face is pale, the voice is low.

In the context of the person who has an excess of qi, but is deficient in blood, from the outside they might look relatively healthy, but when you put your hands on the pulse, you can observe that inside there’s weakness and outside is strength.

When you see a person whose blood is in excess but he is qi deficient, you often see a person who has a high temperament and shows a lot of emotions, he becomes angry very easily and wants to fight.

Even if these patterns of disharmony are different all three can result in what we call stagnation, or blockage at the level of the meridians or organs.

Deficiency bring yin and yang deficiency which affect each other, bringing themselves to deficiency and influencing other organs.

From this perspective it’s not wrong to say that deficiency could also be translated as illness or sickness.

So Shi Fu gives an example of a headache, there are hundreds of different kinds of headaches, but it doesn’t matter whether it’s a migraine, cluster or whatever …. It all has its root in deficiency and inability of sufficient blood to reach the brain.

When this deficiency affects the brain for a period of time eventually we get excess, a blockage and Shi Fu explains that by the feeling of pain.

We have a stomach, we have a liver in the Chinese medicine we have some concepts we call the stomach meridian and the liver meridian, we have fourteen major meridians associated with organs within western medicine.

When we talk about meridians obstructed we talk about accumulation of stagnant blood which that had over-clogged and began to accumulate together and lost its ability to carry oxygen.

Shi Fu is talking about the etiology of disease, the progression of how the illness develops in the Chinese medical thinking system.
First, there is a qi deficiency, which not treated for a long period of time can lead to excess which results in disease. (Although the deficiency by itself can result in disease. Everybody’s body is different.)

So speaking more simply, regarding this disharmony, we have to alleviate excess or deficiency in order to prevent illnesses.

So Shi Fu is describing that in our modern society there are new illnesses and diseases that we have never seen before or thirty years ago, they all have their root in deficiency and excess.
How can a person initially become deficient? In physics we talk about inner qi, but we also talk about inner energy, when the inner qi becomes low, you become deficient.
When we talk about losing energy we also talk about low energy, and inner qi, and accordingly we have to raise the energy level.

When qi and blood are both deficient we use specific herbs to boost both blood and qi.
Based on our many years of practice and our exposure to western medicine, we still feel that the traditional Chinese herbs are the most efficient to boost deficiencies, and solve the patterns of disease.

There are also things we can do about our diet: in the sense that certain foods are boosting, for either the blood, the qi or both and this is considered the subset of herbal therapy, foods with a moderate effect.

There’s another way of boosting qi that involves qigong. I’m assuming everyone heard this word.

Another one is the kind of boost you can apply with the Chinese doctors and remedies, who can directly push your qi levels, and this works much faster.

In a perfect world, if we could choose one of those three, we would obviously choose qigong, it’s the most efficient and the most effective.

There are very few people who are able to do so and among those few people, there are only a few willing because it takes a lot of their own qi to give it to another person.

Which is why the personal practice in qi gong is very important because you don’t have to rely on another master to do it for you.

Those of you who have been here before have some sort of idea of what qi is like and qi gong energy is like. Also for those of you who didn’t, Shi Fu is going to boost your level as well. This way you will recover faster from your jet lag which is why Shi Fu is willing to do that for you.

Do you have a question?

Ask your question bellow by posting a comment. The comments are moderated (therefore wait few minutes for your question to appear).

Aurelian will handpick 8 quesitons and answer to them in a podcast (audio) format which will be posted here.

In this short video, our Grandmaster performs a demo consisting in multiplying two six digits in mind in under 2 minutes.

You see, having lots of Qi (power) but not so much Shen (awareness) is dangerous.

Therefore training the mind side by side with the increase of Qi is the route we should take.

In this short video you’ll see how Master JIANG and his disciple, Aurelian POPA, performed a telekinesis demonstration exclusively using their own qi.

They both convey this energy, qi energy, outside of their bodies so that the audience in the room can “see” some of its effects.

We edited the movie so that you can see everything from different angles at different zoom/cropped levels.

PS. Also you may want to watch the other telekinesis demo (the first one).

We established new slots for the next visits this year in Taiping, China — Shifu’s clinic place.

Please plan to visit Master Jiang’s clinic according to the following intervals:

I suggest to take approximately one week off to include the desired interval.

The registration page is located here.

Choose the desired interval from the drop-downlist, bellow the introductory text.

You have to arrive on your own to Tunxi (airport code TNX) latest on the evening before the visit starts (Oct 22nd or Nov 6th).

You can arrive to Tunxi by plane (recommended), public bus, or train.

The rented bus will leave from Tunxi to Taiping at 8 PM sharp (Oct, 24th or Nov, 6th respectively) after the whole group gathers.

The meeting point in Tunxi is the lobby of Huang Shan International Hotel (every taxi driver can get you there for 10 RMB).

The first group meeting with Master Jiang will be at 9:30 AM on Oct 25th and Nov 7th.

After the bus will drop you in Tunxi please plan and make your own trip arrangements.

You will be automatically included in the accommodation arrangements for 3 or 4 days, depending on when you land or arrive on Tunxi:

All these fees are to be paid cash in China (RMB, USD or EUR) upon your arrival.

After the last day of the visit make your own trip arrangements.

If you need more nights in Tunxi and/or Taiping let my team now in advance (use the observations field in the registration form).

That’s it for now.

Oh, and one more thing.

I strongly suggest you to read this book *before* coming to China.

For any other info please contact me by email (ap[at]masterjiang.com — use @ instead of [at]).

Hope to see you in China soon,
Aurelian

NOTE I only contribute on and endorse these two websites:

There are other websites or web properties that are using my name, abusively, without my consent.